Doping in cycling, hazing in the NFL… It sounds to me like some of the people identified as “professionals” are actually the exact opposite.

After I wrote about bullying, I was pointed to the current story about the issue surrounding the Miami Dolphins.

In case you haven’t heard, the NFL is investigating the Miami Dolphins football team after bullying allegations came out about offensive lineman Richie Incognito. 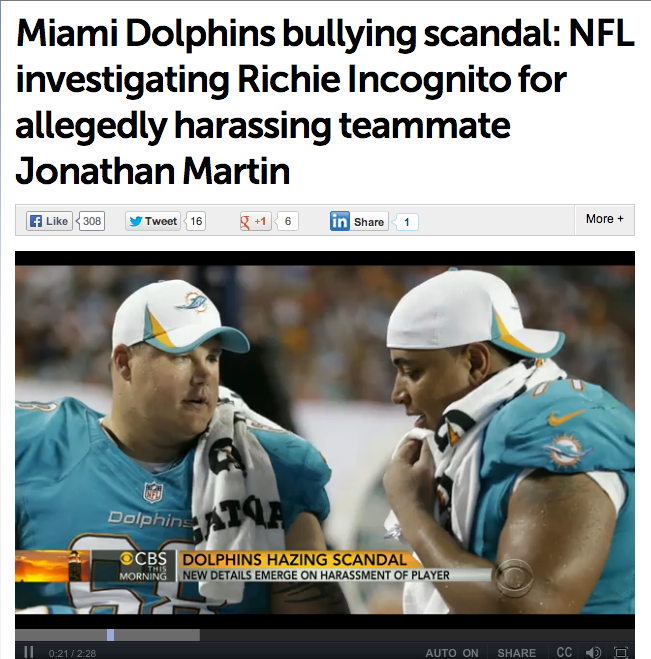 I don’t agree that this is necessarily bullying, I think that bullying has become a buzzword and so the public is accepting it; what I do think this is though is juvenile hazing.

In the CBS story linked, rookie hazing in the NFL is brought up like it’s nothing, as if duct taping a person to a goal post is normal and ok. The problem with that mentality though is how the NCAA would come sweeping in if that were to be brought up from a college campus, but is seen as perfectly decent in the professional level of athletics.

If it isn’t ok for a 20-year-old on a college team, fraternity, or marching band then why should it be ok for a grown man to do the same thing?

Incognito was reprimanded by coaches and no longer has a job with the Dolphins, but the rest isn’t acceptable either.

This brings me to my point: None of it is professional, so why do we call these people pros?

The most appropriate definition I found was from Merriam-Webster:

(1) characterized by or conforming to the technical or ethical standards of a profession
(2) exhibiting a courteous, conscientious, and generally businesslike manner in the workplace

So with a certain standard of professionalism that everyone else is expected to uphold, why are athletes skating by?

I mentioned doping in cycling earlier because a great movie about Lance Armstrong comes out Friday.

Velo News, in addition to the Armstrong movie coming out, put out a great piece on the issues that come with admitting that the standard has been dropped. The outstanding story being the catch that Ryder Hesjedal has found himself in now that he has admitted to doping, despite a seemingly ungrateful governing body that is as much to blame for the level of doping as the riders.

So with double standards pervading athletics at every level, a “professional” atmosphere that seems to catch athletes in a “damned if you do damned if you don’t” mentality, I ask: What do we want, and how will we get it?

I don’t support hazing, having experience in marching bands and a collegiate fraternity, but when it comes to doping in sports, it’s hard to blame athletes that do it if doping has become a part of the culture.

Ethically, it all seems wrong, but the consequences have to be real if we want a real level of professionals.